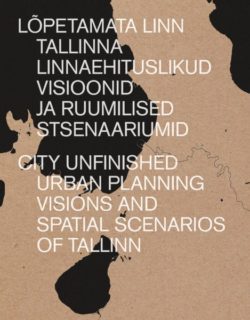 Estonian Academy of Arts Faculty of Architecture presented the first results of visions of the city research project.

The first results of the large-scale research project of the EAA Faculty of Architecture “The Unfinished City: Spatial Scenarios and Visions for Future Urban Developments for Tallinn” were introduced at the Museum of Estonian Architecture. “The Unfinished City” is a research project that lasts up to three years. The main focus of the project is on the urban situation of Tallinn and its potential developments in the future. The project is developed in cooperation with the city of Tallinn and is made possible with the help of E.L.L. Kinnisvara, who will invest almost half a million euros to the project during the three-year period.

At the event, Toomas Tammis, Dean of the Faculty of Architecture of the Estonian Academy of Arts, gave an overview of the goals of the research project and architects Johan Tali and Kalle Komissarov, who are conducting the first stages of the research, introduced a new publication that compares how modern cities are planned and illustrates different scenarios, implementation of which could enable international credit rating agencies to declare Tallinn as the world’s most liveable city. The research project is lead by professors of architecture of the EAA Andres Alver, Andres Ojari, Toomas Tammis and doctoral student Johan Tali.

According to Johan Tali, one of the groundbreaking conclusions to take in consideration while observing different cities is that European cities are still viable and relevant. “Distinctions become evident in how that growth is guided and how it is agreed between the parties. Although Tallinn has been evolving episodically, we are still in a position where common organized development is something not realized or commented accurately enough neither by city architects, city planners nor developers. The first mid-term review of the research project that has been launched herein works as an abundantly exemplified initial task when establishing those future agreements,” Tali explained.

“The Unfinished City” is a large-scale research project that focuses on researching spatial scenarios and visions for future urban developments for Tallinn. The research spans over six semesters and includes EAA lecturers, research fellows, doctoral students and outside experts. The city of Tallinn is also a cooperation partner of this project. During every semester, one specific subject will be thoroughly analysed and the results will be introduced to the public.