TSENTER helps the idea to become from wood to product 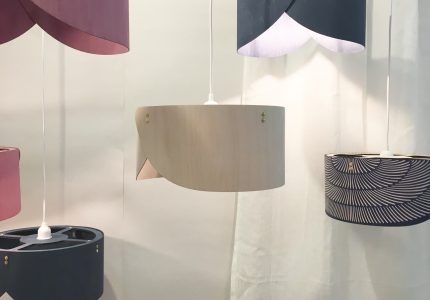 There is not a shortage of new ideas in the world, but there is a lack of people who can connect an idea with free money or create a prototype.

Product development is one of the main activities of the TSENTER competence centre of Võrumaa Vocational Education Centre. So many ideas drawn up on squared paper have become real products through drawing work and prototypes. In addition to domestic companies, there is also experience in product development for foreign clients.

A Swedish designer, Matilda Hunyad, came to Tsenter with a request to acquire a bent plywood lamp. The question arose where the Swede got information about the possibilities of TSENTER- from an Estonian designer and with a recommendation. The query was accompanied by a sample image, but unfortunately the technology and machines in TSENTER did not enable such a product to be made. Then the development of prototypes, product samples, began. Five different prototypes were made, risk areas were found, and the designer was asked for feedback on an on-going basis.

Different types of plywood and colours were tested during the development of the prototype for the lamp. Knowledge of wood, the ability to use different drafting programs, as well as negotiation and language skills were very important here. This time, the laser cutter machine was used at TSENTER, because it allows precise cutting and engraving. The finishing line of TSENTER remained a bystander in the development of the lamp, as these were small details that needed manual finishing. The lamp was finished with eco-materials: the colour was given with beeswax and experiments were also performed with Estonian blackcurrant juice.

When the design, layout and finish were agreed upon, a test batch was made and the first two sets of products were sent to Sweden. Today, plywood lamps have travelled to the Stockholm Fair, found a place in a beautiful catalogue and are sold in a design department store. In the autumn of 2019, the lamp was chosen as the best follower of the trend in Sweden and the most interesting designer product. The collaboration was successful and the designer has now ordered several small batches of lamps from TSENTER, and one table and chair are also in development.

TSENTER has been created primarily to support companies in the wood and furniture sector, but other companies can also realize their exciting ideas here. The main thing is that Estonian green gold, wood, is being used when developing a product.