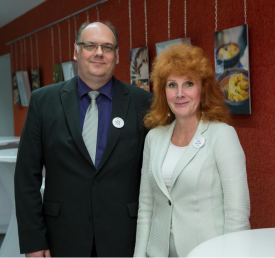 Every cooperative relationship between a university and a company is special. It starts with the first meeting and can last for years and decades, or fade away after a half a minute. It can provide excellent results for both sides, or end in an opinions thicket. A relationship like any other human relationship: we know how to plan the first phase of cooperation, but we may not have a clue where it leads.

About two decades, the cooperation between researchers and entrepreneurs in Estonia has been supported by various funding measures. As soon as a measure is opened, an active project development begins, and a majority of existing ideas are calibrated and modified according to the conditions of the measure.

This is the way we have lived – from year to year, from measure to measure, and from project to project. When living this kind of life, interest in cooperation usually decreases when the project is not financed for some reason. Referring to the presence of the opportunity of financial support has been the main thing for universities with which to captivate companies.

But funding measures have not been consistent, they have been very fragmented, and it takes a very large amount of resource for adaptation before it soon turns out that money is gone and a new measurement is to be prepared again…

At the same time, we see two trends: it is the last period of large-scale structural funds and the existing large-scale support programs, for example, applied research and technology development centres measure, are with their terms less attractive to companies than in previous periods. And thus, interesting questions, which have not been discussed that much, arise: how might the cooperation between Estonian researchers and enterprises look like without the support programs? Or what measurements have given the best results, so that Estonia could continue with them?

The answer to how to move forward seems too easy for us: we just have to start communicating more, have more meetings, get to know each other, develop common ideas. The more detailed meetings, instead of listening to long speeches and lectures, we manage to arrange, the better the results. Everything starts with the company’s interest, and the first referral.

Also, the representatives of State ask and inquire over and over again, how communication between researchers and entrepreneurs could be contributed. That is in the situation where there are less than 200 companies with more than 250 employees and about 30 000 operating companies have emerged in Estonia in the last decade, while the average number of employees has decreased from ten to six.

We dare to confirm, that all the major companies in Estonia who feel the need for support in research and product development, have found universities long ago and have generally been interacting directly with researchers and research groups. If one university cannot provide good enough support, they turn to another university, and if the latter also doesn´t provide support, then the research and development partners are found abroad. Our common task should be that new operational research groups that develop and intensify as the result of young talents and internationalization would quickly reach a strong and very good cooperation with Estonian companies – regardless of whether the measure is opened or not.

Unfortunately, experience shows that such a vision and  reliance on universities that can be seen for example in Nordic countries, where large-scale contracts between large enterprises and universities also support carrying out basic research and applied research in the early stages, cannot be seen in Estonia. Or, in other words, in Estonia, there are no large companies, which could afford such an approach.

A stereotype of a modern scientist is no longer a curious nerd, but an entrepreneur balancing between scientific support and market orders. Such extremeness makes you think how many years Darwin’s scientific discoveries would have been deferred if the use of Beagle would have been declared ineligible.

What would be a model of cooperation to develop Estonian entrepreneurship? In recent weeks there have been a number of sceptical writings criticizing the contribution of the so-called start-ups to economic development, as they quickly move to other parts of the world. We have heard exactly the same doubts from both Helsinki and London, with a reference to businesses moving to the US. Also, what use could a university be to a company with an average of six employees that generally does not have its own science and development team?

We do not believe that there is any other solution but to increase the number of cooperation episodes with our small and medium-sized enterprises. For this purpose all public universities have established a cooperation platform ADAPTER.ee and each year organize a cooperation festival “At the right time at the right place”, which was this year held on October 6 and was visited by more than 600 researchers, entrepreneurs and officials; a video recording on University of Tartu website was viewed 1000 times during the first three days.

Also, the future of new start-ups is certainly not one-sided emigration. Both Tartu and Tallinn have been mentioned as cities with the best living environment in pan-European reviews. It is in our power to ensure not only that start-ups stay here, but to generate interest and bring here research capacious companies from all around the world. There are already examples where researchers have formed NGOs and met with investors to launch a new wave of university spin-off enterprises.

It is essential to grow a new generation of entrepreneurs

And finally, the developments in launching and developing student teams’ multidisciplinary entrepreneurial projects and triggering entrepreneurship training programs during recent years cannot be excluded, although their impact can be assessed over a longer period of time. Universities have found numerous supporters from Estonian entrepreneurs and from the rest of the world, Prototron Foundation in Tallinn and Vega fund in Tartu are able to generate increasing interest and motivation. Students’ teamwork, developing project management and digital literacy, also strengthening the teaching of computer sciences, software engineering, bio-companies and other smart specialization directions provide research-intensive companies the required workers and entrepreneurial skills to interested students. Thus, a new generation of entrepreneurs arises that is, among other things, very well-informed about university opportunities.

Erik Puura, the Vice-Rector for Research of the Tartu University

Tea Varrak, the Vice-Rector for Innovation and Business Relations of the Tallinn University of Technology