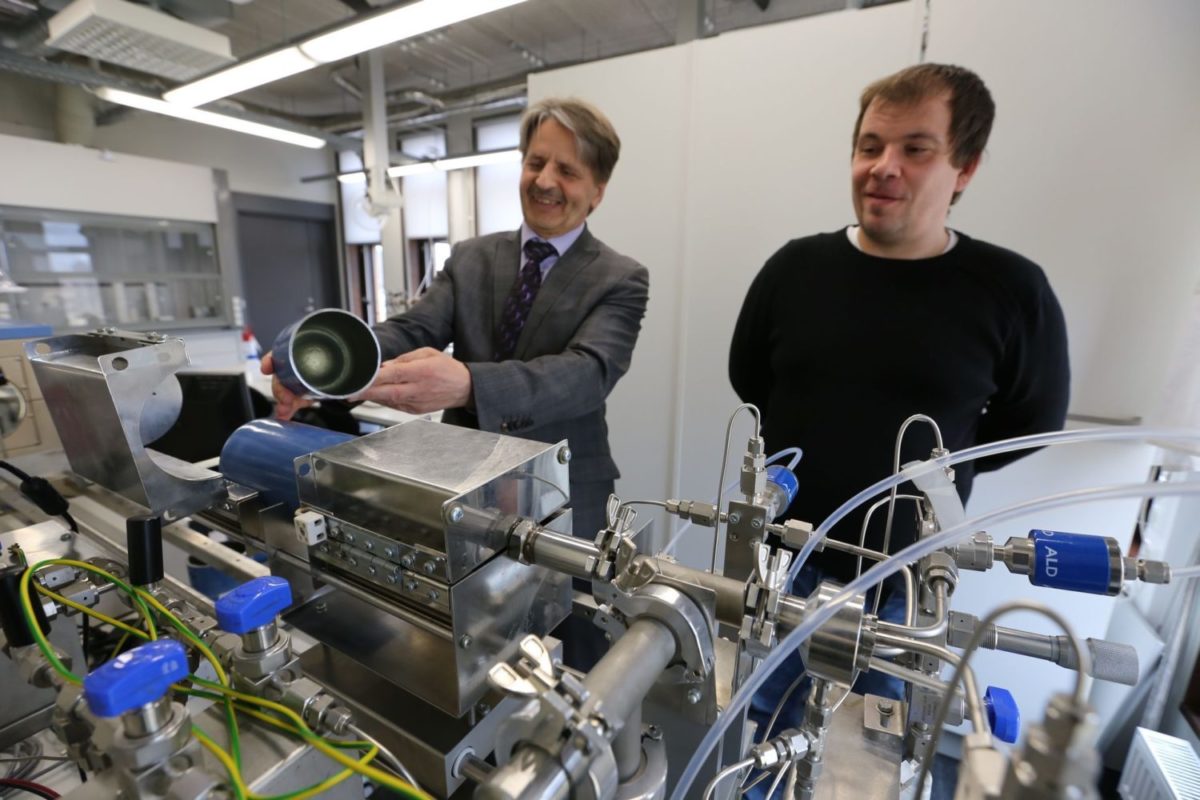 One of the world’s largest gas companies, the German chemical giant Linde AG, who in the Baltic States and the Nordic countries is represented by the subsidiary company AGA, is building an industrial pilot device according to a prototype created by the thin film technologists in the University of Tartu, in order to make their gas cylinders incorrodible.

Linde supplies gases needed in the industry, as well as, in medicine and for environmental measuring, inert gases for the research laboratories and a number of special gas mixtures with a high-precision structure.

Since a large number of gases are corrosive to metals, i.e. they cause rust, then in order to transport or store gases, special steels or aluminium materials need to be used. A cheaper alternative is to cover the inner surfaces of gas cylinders with an extremely thin nanomaterial, which reduces corrosion substantially.

The problem is that the cylinders are sealed spaces – they have only one small opening, which makes it very difficult to access the interior. Added coating cannot change the material properties of the container or affect the high-precision gas mixture inside and it must be able to withstand the mandatory periodic pressure tests. It is under these conditions, that the atomic layer deposition reactor created by the material scientists of the University of Tartu will be of use.

“The laboratory device is ready and it works!” says Lauri Aarik, a thin film engineer of UT. He also adds: “We will apply for a patent in Europe, in the US, in Japan and elsewhere.”

With the atomic layer deposition reactor materials can be covered, atom by atom, with an extremely thin layer of corrosion protection. Both the reactor and the effective anti-corrosion nanomaterial is the result of years of research by the thin film technologists of the University of Tartu.

“We have finally reached the stage where Linde has chosen to deploy the coating and deposition technology that we have developed in its factory,” said Väino Sammelselg, Professor of Inorganic Chemistry and the Head of the Material Science Department at the University of Tartu. “Whether the industrial device will justify itself at the end, will be revealed in the coming months, when it is switched on,” Sammelselg who is optimistic about the results added.

German gas company Linde is the first who will test the atomic layer deposition device for the processing of cylinders in their production, but a similar solution could be helpful for other companies struggling with corrosion, including both aviation and medicine.

Äripäev also wrote about the success story of the physicists: http://www.aripaev.ee/uudised/2017/04/13/materjaliteadlased-aitavad-suur…

Competition: Recycling in collaboration with scientists and companies
Development of cosmetic products through Adapter
See all news