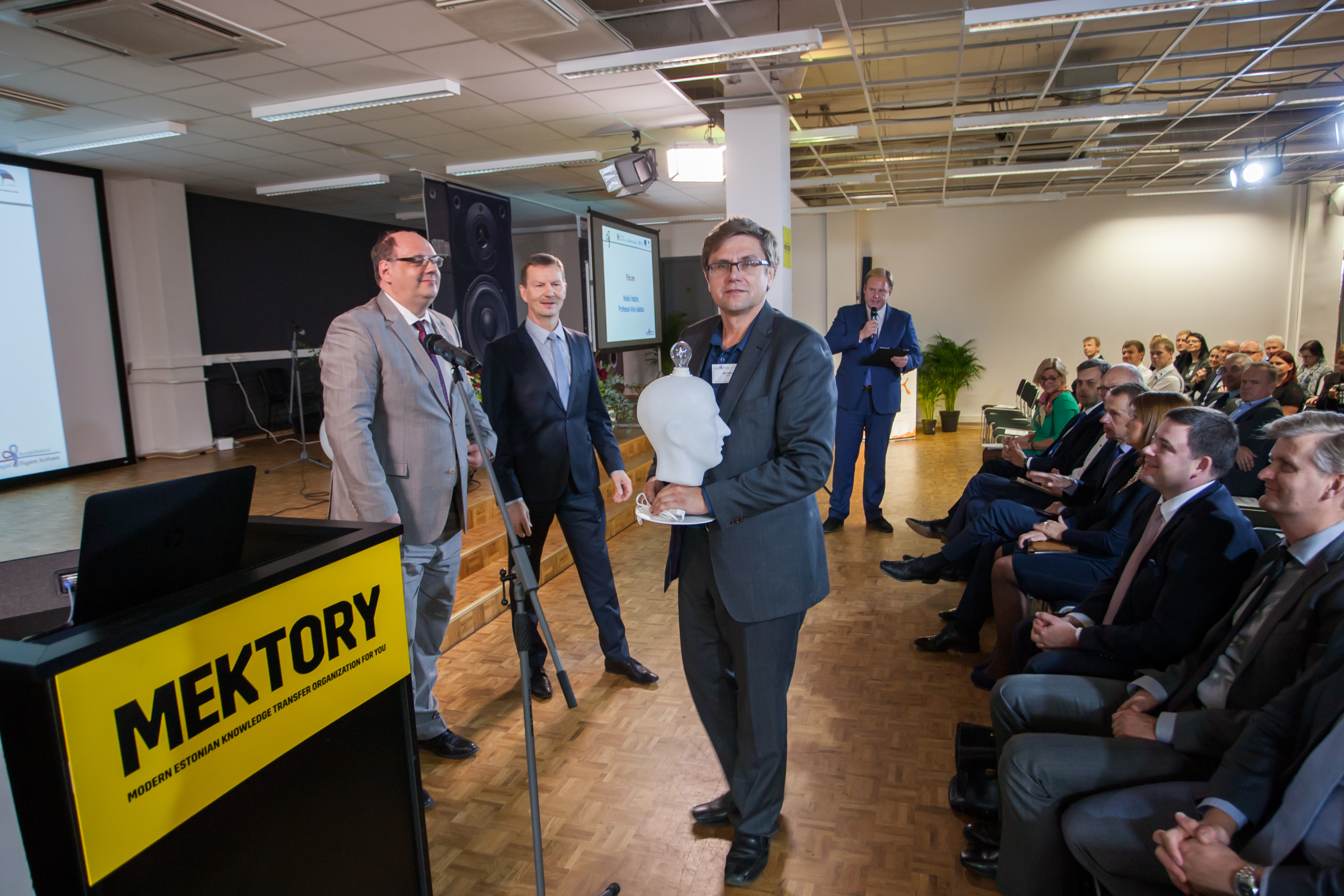 This year, the main organizer of the festival organized by six public universities was the University of Tartu. Erik Puura, Vice-Rector for Development of the University of Tartu, said that the feedback has been positive. At the event, both the entrepreneurs and the business cooperation leaders of the public sector thanked for organizing the festival. “The fact that the event was attended by over 600 people definitely shows its success. The festival has also been viewed on UTTV over 2,300 times and this is certainly in part thanks to the lift speeches,” Puura said.

As an important result of the festival, the Vice-Rector for Development brought out that information about universities’ cooperation in the development of business relations has reached the decision-makers, authorities, and many entrepreneurs. “As a result, many governmental agencies and organizations have started to connect their processes and development with Adapter. The latter was also brought out by the majority of speakers at the business cooperation seminar held in the Riigikogu, emphasizing that it is a necessary development. “

Vice-Rector for Innovation and Business Relations of the Tallinn University of Technology and the organizer of the next festival, Tea Varrak, was happy that this year all six public universities joined forces. According to her, this gave the festival significantly larger dimensions, both in regards to content and in impact. “I’m also pleased to say that the festival is taking innovative steps in its structure, researchers’ lift speeches are something that we will continue next year as well,” Varrak added.

One of the organizers, Aitel Käpp, Communications Manager in the Technology Transfer Unit of the University of Tartu, said that the aim of the festival was to show how much useful know-how for an entrepreneur there is in universities. “I believe that we managed to meet this goal. When interviewing entrepreneurs, they showed surprise over how practical and vital research topics universities offer,” Käpp said. He added that organizing such an event taught him that if you have something to offer to others, you must say it clearly and in a loud voice.

Tea Varrak also said that one of the biggest values of the festival is the opportunity for the researchers to proudly present their work outside the university premises. “The goal was to bring together as many researchers and entrepreneurs as possible. At this year’s festival, this was nicely achieved. “

When talking about event-related challenges, Aitel Käpp said that this year six universities were involved in the organization of the event – that and considering all their wishes was a serious challenge. “I believe we handled it quite well and the partners got exactly what we promised to give them from the event.”

At the festival, Adapter, the business network of Estonian universities, was presented to the public for the first time. Siim Kinnas, Technology Transfer Manager of the Technology Transfer Unit of the University of Tartu, said that people who participated in the festival, both the companies and the public sector, were very interested in Adapter. He added that this was also evident in the growth of the visitor numbers on the website adapter.ee.

Kaspar Kroov, Board Member of Trackdrone OÜ, who participated in the festival, noted that he got some interesting ideas and contacts, for example in regards to making promotional films. “I think that the event was important because it connects universities and companies. Our company has cooperated with universities before, but I believe that such an event will certainly encourage even more cooperation,” Kroov said.

Triin Päid, Marketing and Communication Manager of AS Värska Sanatorium, said that thanks to the fact that previous cooperation has been very successful, she wanted research related support and contacts for her new ideas. “New contacts to find out what various research institutions have to offer and what new opportunities have been generated,” Päid said.

Päid added that she came back from the festival with new contacts and new ideas. “While listening to the stories of institutions and the possibilities of research institutions, she got a few new ideas, which at the moment are just thoughts and therefore it is too early to present them to the public.”

Päid said that the researchers’ lift speeches were also creative and interesting. “Each lift speech gave a new insight – surprising with a new approach and on the other hand presenting a good old knowledge from a different angle.” According to her, the event was very well organized, and she especially enjoyed the Viljandi Culture Academy interludes.

Erik Puura said that until now, the form of lift speeches has been used in business idea contests. “We don’t know of this method being previously used to quickly highlight researchers’ activities and opportunities. The speeches were successful mainly because they were well prepared,” Puura said.

He added that in his opinion, the two and half hours with a small intermission were comparable with a theatre performance, where there was not a single dull moment. Puura thinks that the possibility to use mobile phones for voting and give awards to the best certainly added extra spice and made the performers try even harder. “Although the overall winner, Andres Kuusik, won thanks to his sense of humour and the bond he created with the audience and not because he had harshly followed the three-minute rule.”

Gerda Mihhailova, the Programme Director of Service Design and Management in the Department of Entrepreneurship of the University of Tartu, said that she participated in the cooperation festival because its form seemed interesting and she wanted to reach the target group of entrepreneurs. “For me, it was more difficult to prepare for the lift speech than expected – a complicated research field had to be merged into an extremely short explanation time, and the speech had to be memorized. I think it took me one and a half days to prepare,”  Mihhailova described.

The Programme Director spoke about the design of services as a world-changing approach. “It was good that I rehearsed the text out loud several times, as most of the performers had difficulty with the time limit and text fluency,” Mihhailova added. According to her, the three-minute format was very stressful, even for experienced performers. “I don’t know how it could be made more humane. In case I have to perform again, I fortunately already have the text, and I’ve worked it through.”

Mihhailova said that after the festival, she was contacted by one entrepreneur. She also added that maybe such events help encourage entrepreneurs and create a habit of interacting with universities.

EVEN MORE ENTREPRENEURS TO THE FESTIVAL

At the cooperation festival awards were distributed to the scientists who stand out among others.

Mõlder said that compiling a three-minute speech was not difficult for him. «It took me an hour to prepare, and I participated in the festival because we want to find work for our research group,” Mõlder explained.

However, according to him, he was disappointed in the festival. “Unfortunately, there were very few companies whom to perform. Most of the people in the audience were from universities, just as in the previous festival,” he said.

Mõlder added that if it would be possible to get a large number of entrepreneurs to participate in the event, then it would be a very important festival. “This time, this was not quite so and therefore I am seriously considering whether to participate next year.”

The researcher said he would also expect a greater efficiency factor from the universities’ auxiliary units to create contact with companies, “so that researchers could focus on the research, not to drown in administrative obligations and searching for companies.”

Tea Varrak said that in her opinion the number of entrepreneurs was not small, but certainly next year it is planned to involve even more entrepreneurs. “This year, there were other business-oriented events on the same day, and that might have played a role. At the same time, I believe that the entrepreneurs, who attended the festival this year received food for thought and contacts.”

Erik Puura believes that such a big event that takes place in cooperation with other universities will provide a critical dimension, generate interest, and will not let the form of the event “flake out”.

In 2010 the laboratories of the University of Tartu were introduced, in 2011 inventions and in 2012 services, and thereafter narrower subjects were chosen, such as the quality real estate, etc. “As an inter-university cooperation, while continuing in the same format this festival continues to be useful every year, the event can circulate between different cities and places.”

Next year the cooperation festival will once again take place in Tallinn.

Aitel Käpp said that researchers’ lift speeches form should definitely continue because it spoke to the audience and made the researchers polish their messages to be as accurate and entrepreneur-cantered as possible. “Also, the so-called entrepreneurs speaking hours where entrepreneurs can ask researchers specific questions and get solutions should be taken into consideration,” he added.

Tea Varrak says that at the moment the results of the festival are being analyzed. “We will definitely continue with the form of lift speeches next year, and there will also be an exhibition area. What the festival will be like exactly, we’ll see next year,” Varrak said.

From idea to innovation: what should be considered when approaching researchers?
Health and health promotion in the workplace
See all news