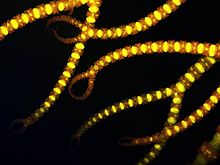 We hear about algae quite often through the press. Perhaps the best known algae for Estonians is the blue-green algae, which, in hot weather and favourable winds, limits the joy of swimming during the beach season.

While the effects of blue-green algae toxins cause rashes on humans (including animals) and, in more severe cases, vomiting and fever may occur, many other algae are useful raw materials in various industries. Be it the food industry or medicine. Red algea (Furcellaria lumbricalis), which grows between Saaremaa and Hiiumaa, is likely to be used in industrial volumes, especially in the cosmetics industry, and is a very effective product for replacing unhealthy dyes used in the cosmetics industry.

The project “Development of a technological solution for the separation of phycoerythrin from red algae in the Baltic Sea”, which ended last year, was the first large-scale study of the competence center Plantvalor established at the Polli Horticultural Research Centre of the Estonian University of Life Sciences. The aim of the project was to find an efficient technology that could be used to produce red colour pigment on an industrial scale.

Red algae, growing in the Estonian coastal sea, is a unique renewable natural resource. “Our red algae has traditionally been used to fertilize fields and since 1966 the production of furcellaran has been started. To this day, this is handled by AS EST-Agar in Saaremaa,” Uko Bleive, chief specialist of the Plantvalor competence centre established at the Estonian University of Life Sciences and Polli Horticultural Research Centre, one of the project leaders, explained. Adding that furcellaran is used as a food texture improver (solidifier) and also in cosmetic creams.

As the goal of AS EST-Agar is to use red algae more thoroughly, they were also involved in the project. The company is actively engaged in the development of technology and products in the respective field “There were other parties involved and besides the Estonian University of Life Sciences, the research group of Rando Tuvike from Tallinn University made a big contribution and has been supporting the project for a long time. However, OÜ Vetik and AS EST-Agar became business partners,” Bleive said.

Our ancestors have used plants to get the colour red: birch, alder buckthorn, bird cherry, apple and cherry tree bark, rowan berries, St. John’s wort, tarfflowers, bog root, oregano, burdock flowers, alder bark, beetroot, etc. Unfortunately, the production of natural colour pigments from natural sources is in many cases economically impractical precisely because of the availability of raw materials. “In the production of natural colours, it is also possible to grow red beetroots on a large scale, from which the red pigment extracted has found a place as a food colour in the food industry. However, in the case of natural paints, the problems of colour properties and colour stability must always be taken into account. Namely, these colour pigments have a predominantly lower colour intensity and are sensitive to heating, light and pH,” Uko Bleive specified.

In particular, the project investigated different extraction methods and selected the most suitable method that does not damage the protein filled colour pigment and ensures a high yield of colour pigment. Based on laboratory and pilot tests, a technological description of the production was prepared. “It turned out that the colour pigment from red algae is also sensitive to light and heat treatment, so instead of heat-treated drinks, it is necessary to choose more suitable products (cosmetics, confectionery) in which to use it.”

The characteristic red colour of red algae is given by proteinaceous R-phycoerythrin, which is present in the dry matter of red algae in about 0.6 per cent. As macro algae, red algae can be easily collected on a large scale by trawling, which would also allow large-scale production of pigment. In addition, environmentally conscious consumers are increasingly appreciating the use of natural colours in cosmetic products. The production of natural colour pigments from algae and their use is a growing field in the world, and so one of the partners (Vetik OÜ) is developing a red colorant based on seaweed, which is healthy and has a rejuvenating property.

Various tests have shown that the colour palette obtained from red algae ranges from dark red to pink and the colorant is antioxidant. But there are still more opportunities. Compared to carmine red, the pigment from red algae has a lower colour intensity. “At the same time, the red colour pigment from algae is special because of its ability to fluoresce under UV light and in aqueous solution, so it can be used as an additive to produce an exciting light effect in products or as high-purity R-phycoerythrin as a marker in cell studies. The use of R-phycoerythrin as a possible biosensor is also being studied,” Bleive states.

“Cooperation with partners will continue, especially with the aim of improving the quality properties of the pigment powder and enhancing the red algae extraction residues. The competence centre Baltic Blue Biotechnology Alliance + participates in the cooperation network to find opportunities for the use of algae and for international cooperation between entrepreneurs and research institutions,” Bleive added.

Uko Bleive is the chief specialist of Plantvalor (competence centre for health and natural products) of the Estonian University of Life Sciences and Polli Horticultural Research Centre. Studied at Põlva Secondary School and Räpina State Farm Technical School and graduated from the Estonian Academy of Agriculture with a degree in agronomy. Advanced training in horticulture and processing in Sweden and the USA.

The first scientifically proven range of porridges in Estonia.
Estonian scientists created a meat analogue from peas
See all news